Woohoo! I’m so excited about this one! And i feel really proud of myself. I stumbled across a pattern for granny square gloves and fancied trying it out. But i wanted to include a hole for my thumb to go through, and not just have a long tube as the pattern showed.

I chose my colours and got started

I did a bit more another day

I really enjoyed the process of deciding on colours of rows as i got to them, and deciding if i would do one or two rows of that colour.

Yesterday i blitzed it and ended up finishing them! I did the bit for the thumb hole a couple of times as i was working it out as i went along, so had to undo it and remedy bits that weren’t working, but in the end i got  it so my thumb fits comfortably and it looks pretty neat…. I’m so chuffed with myself for doing that. Not only that, i remembered what I’d  done  and replicated it on  the other glove too!

Then i followed the pattern to add the gorgeous top age bottom edges, and was left with THIS: 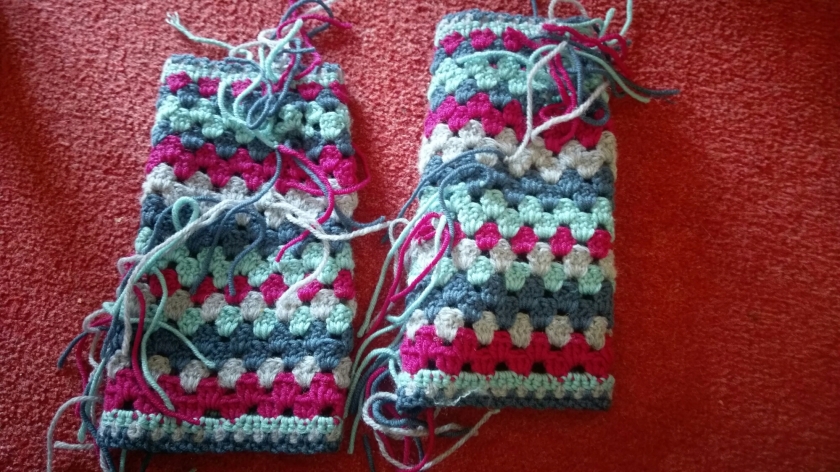 An hour later, after carefully threading (and  re-threading the ends i’d cut too short) each end, and finding ways to weave them in so they stay secure (a process i found unexpectedly therapeutic) i was left with this

And a lovely new pair of gloves to wear. I’m off now for an evening walk to try them out! 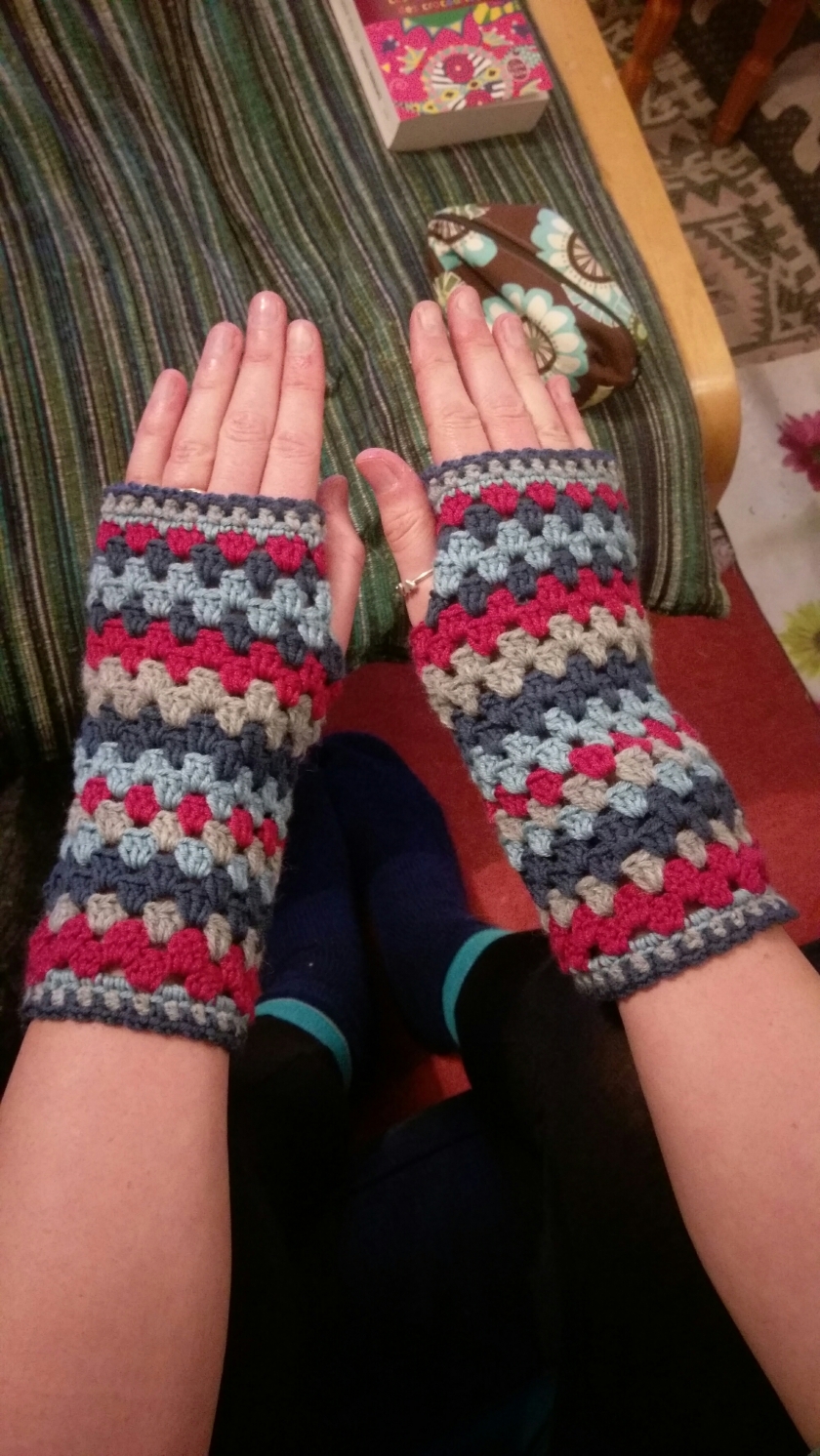 This is a project i started ages ago. It was going to be a poncho as i’d come  across an idea where you could crochet two rectangles and then sew them together in a clever way that would turn it into a poncho once you’d sewn in a neck line. I used it as an opportunity to use up different colours that i had in my wool box, and to try out different stitches. Prior to this I’d  pretty much only done double and treble crochet but here i tried lots of different things, which will give me confidence in using them in other patterns. 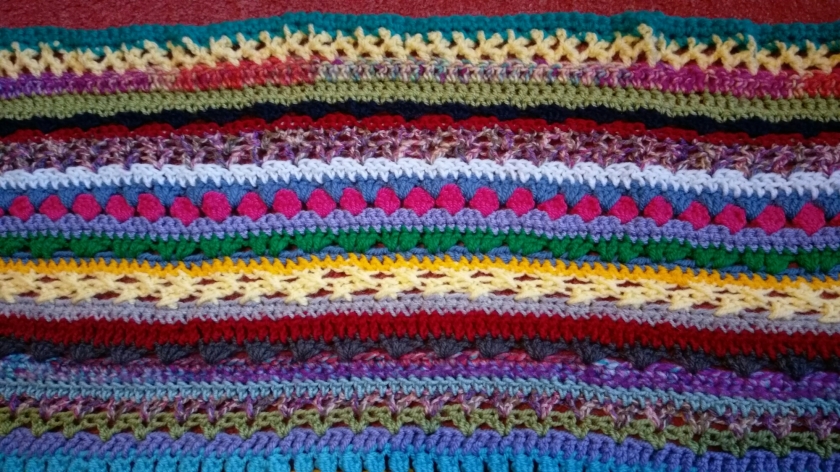 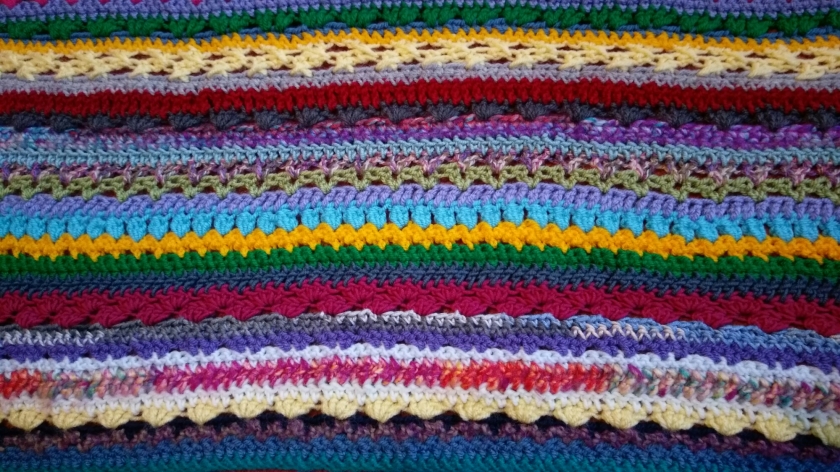 As the rectangle progressed though i realised that even by my standards it was going to be too bright and colourful to wear as a poncho. A friend of ours suggested turning it into an infinity scarf. That seemed like a good idea, but that was back in November and i still hadn’t  done anything about it! This morning the fact that i hadn’t blogged for a few days, linked to the fact that we’re seeing that friend this afternoon motivated me to just get on with it!

So i sat next to our newly adopted guinea pigs, peppa and rosie, and crocheted while listening to their soothing sound of munching on hay!  I decided to crochet the edges together, which I’ve never done before, and rather than try to sew all the ends in (far too many ends to thread!)  i’d try to hook  them under the crochet as i went.

I’m quite pleased with the view from this side as it looks quite neat and tidy. This was the side i was working on. Not so impressed with the other side of this edge,

or the bit when i turn it inside out.

But it’s an infinity scarf/snood thing, and really, who’s gonna look that closely at it when I’m wearing it?! I’m pleased with the end product, and I’m super pleased that I’ve finally turned that rectangle into something I’ll enjoy wearing during the rest of the winter.

Now to figure out my next creative project and hopefully not leave it so long!