Hi everyone. Other than my giveaway results I haven’t blogged for ages. Thankfully it’s not because I haven’t been doing creative things, but more because I’ve been away and lost routine, and also because I’ve been struggling a bit more with my depression,  and lacking energy and haven’t really been motivated to write. I’m still struggling but I’m going to write a quick update of the things I’ve done since I last wrote, as today I went on day one of my stone carving course and I know i’ll want to write that up tomorrow and I can’t bring myself to leave out the things I’ve done in between the last post and this one. Ok, ramble over. Here’s what I’ve done.

Ages ago I made a paper cut for our youngest niece, 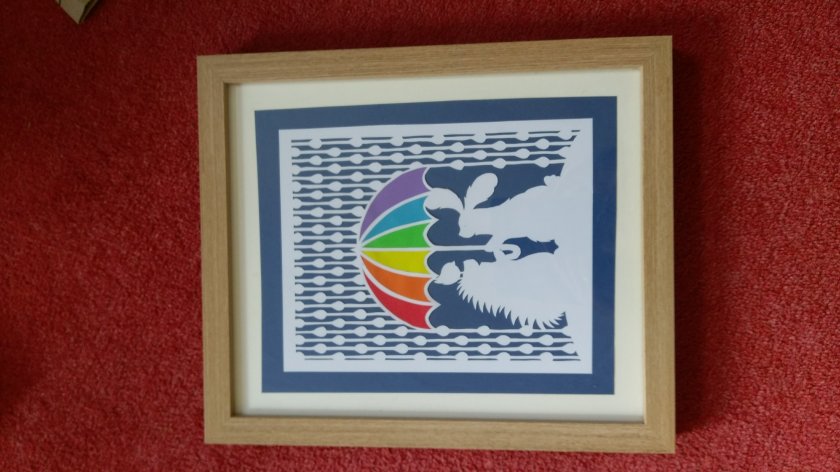 and i wanted to make something for her sister as well before I gave  it to her. As she has my husband’s old bed which is like a very high up bunk bed without the bottom bunk I thought some bunting might be quite cool. I was excited when I found janine’s blog post about her peacock pattern (how cute are her photos of her cheeky peacocks looking at things?!) and saw that she had also made peacock feather bunting. I bought her pattern and got on with making 10 feathers.

I was going to get beads to go between the feathers but unexpectedly ended up finding perfectly coloured buttons in a teeny shop on the bath road that sells  hand made crafts. It was even cooler after that as i was going for a pedicure and when I was asked if I wanted some magazines to read while having it done I said ‘it’s  ok, I’ve got my crochet’! Boy was that good having someone massage my feet while I crocheted… I’ll do that again I think!

So, here’s the finished bunting 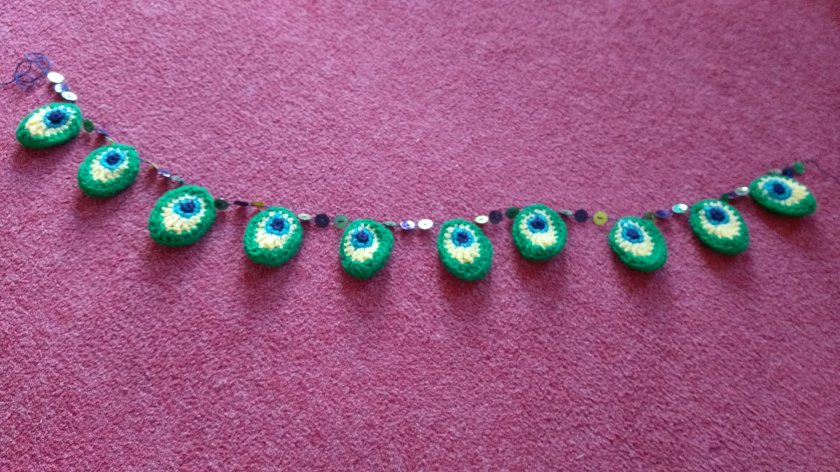 which I gave her while we were camping, so the family hung it up in  their tent, adding decoration to the tent, and conveniently keeping the bunting from getting tangled! 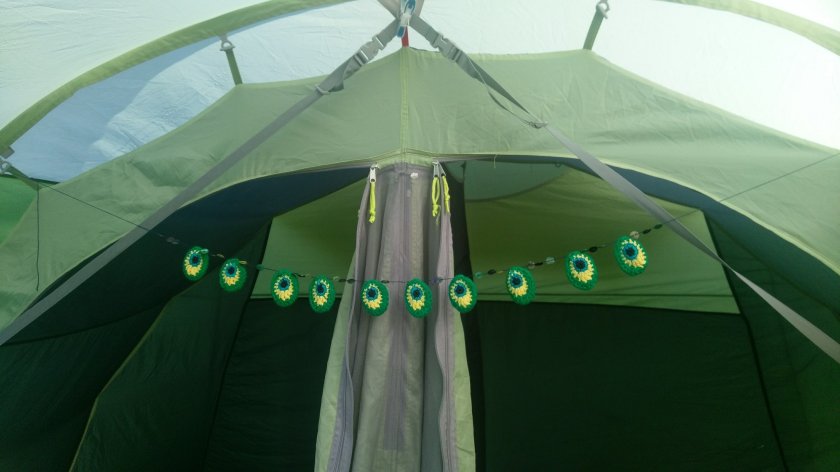 After the camping trip we headed north and went to stay with aunt Joyce (who previously helped me to work out the crochet scarf pattern which had been written incorrectly). While we were with her I started crocheting a shawl for Charlotte who had put a request on her blog to swap one of her hand made necklaces for a different hand made item. I fell  in love with the beautiful unicorn pendant, and offered to make a shawl for her in return. I offered her the choice of different colours of caron cakes and finally took the wool with me to start the shawl. Once I started with a 15.75mm hook (as the pattern suggested)  I realised  this was not going to be very easy. I couldn’t figure out where the stitches were and it seemed to be growing bizarrely, and was INCREDIBLY holey. I kept going though as I had no other wool. 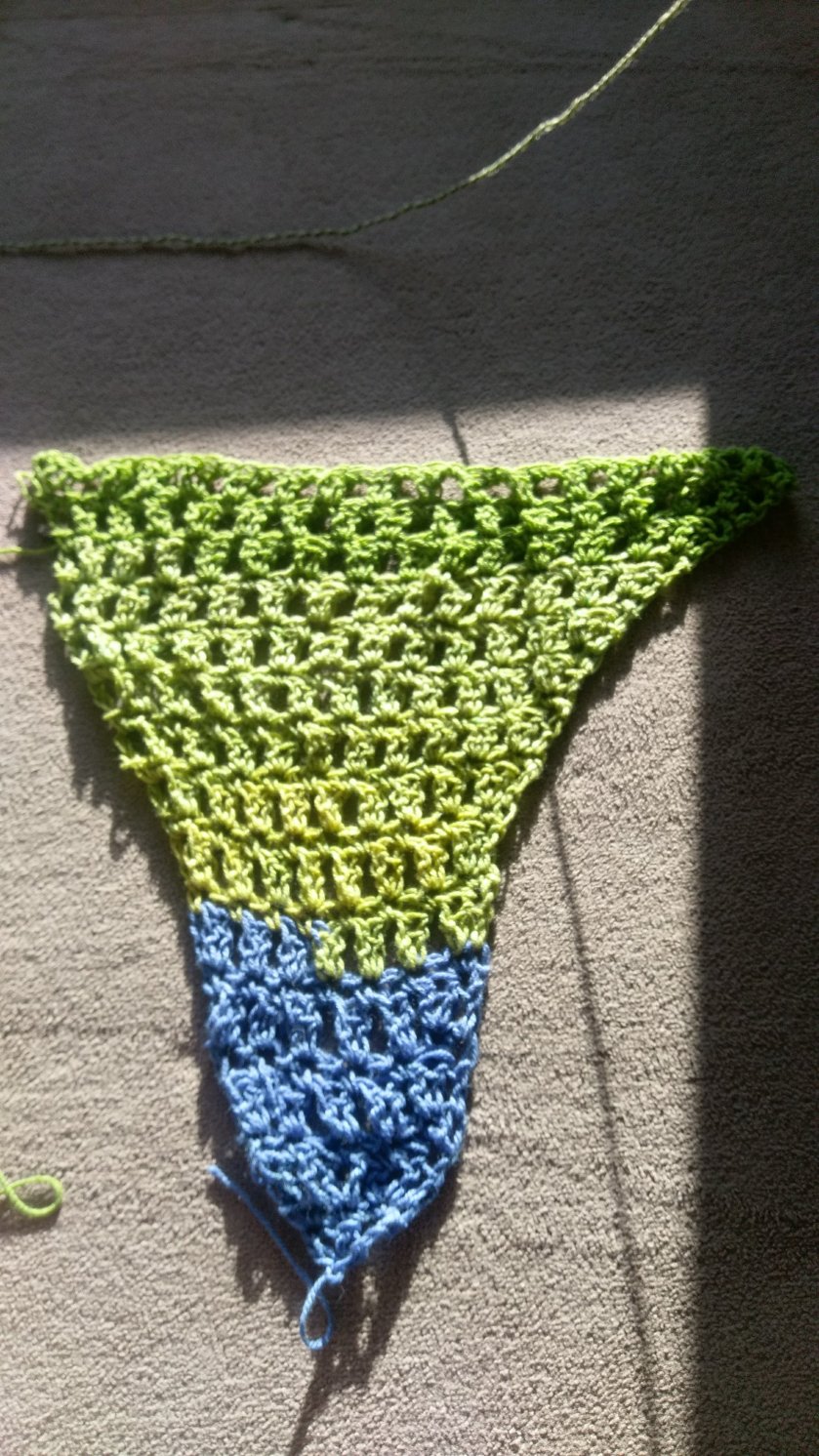 Our holiday moved location again and we had a few days in saltburn by sea. I was so excited when we went on the pier and saw this! 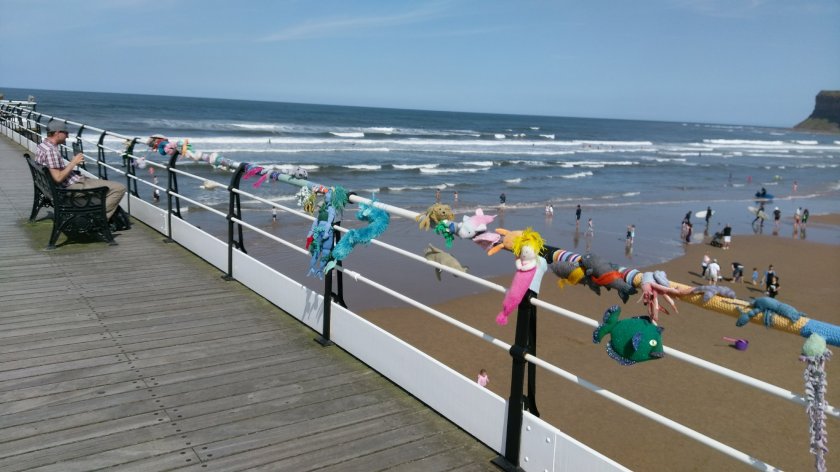 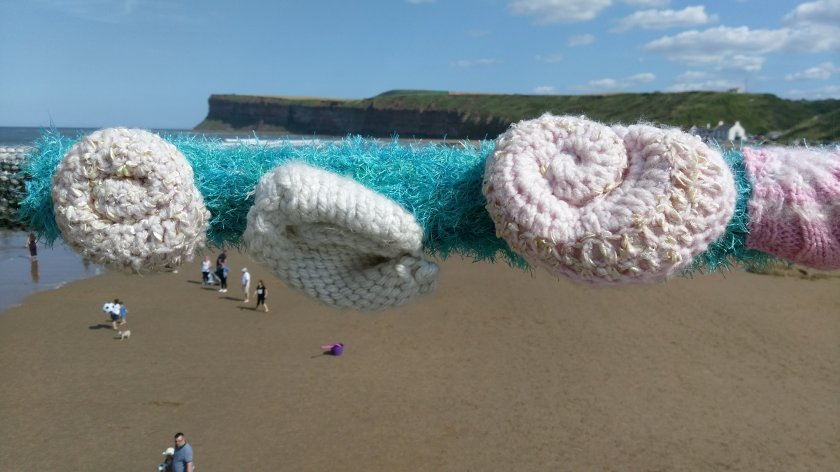 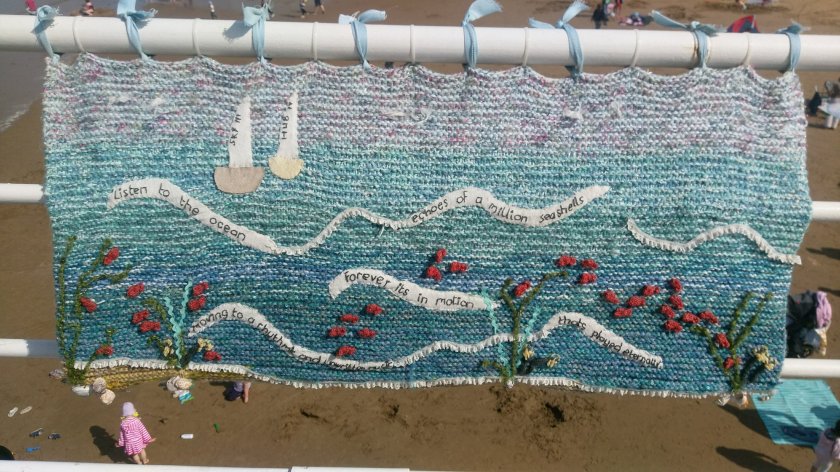 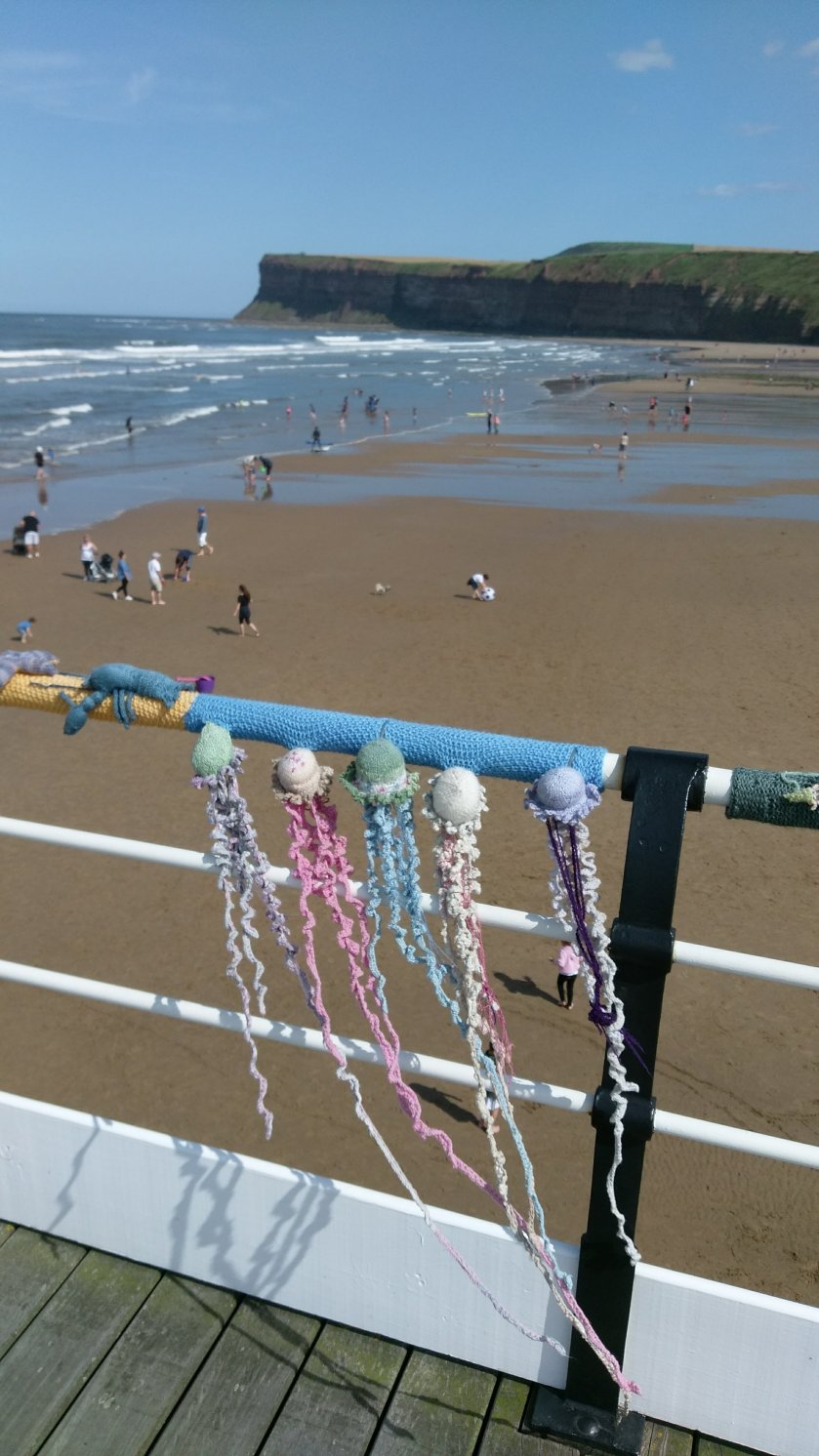 While I was looking up about the yarn  bombing on the Internet I came across the Facebook page for a yarn shop just in the town, so i dragged Mark there to see if I could get a nice chunky wool to try on the shawl instead. Once there the lady in the shop helped me realise my rather humongous mistake with the caron cake as she looked at the pattern and said ‘oh, you need SUPER chunky for  this’. Hmmm…. Rooky  mistake? Not actually reading what sort of wool you’re meant to use, and assuming a wool you have will be fine? Oops!

Anyway, she didn’t have any super chunky wool but something that was still rather chunky, and a slightly smaller crochet hook. So I hoped Charlotte wouldn’t mind the change of colour (she doesn’t!) and went for it. 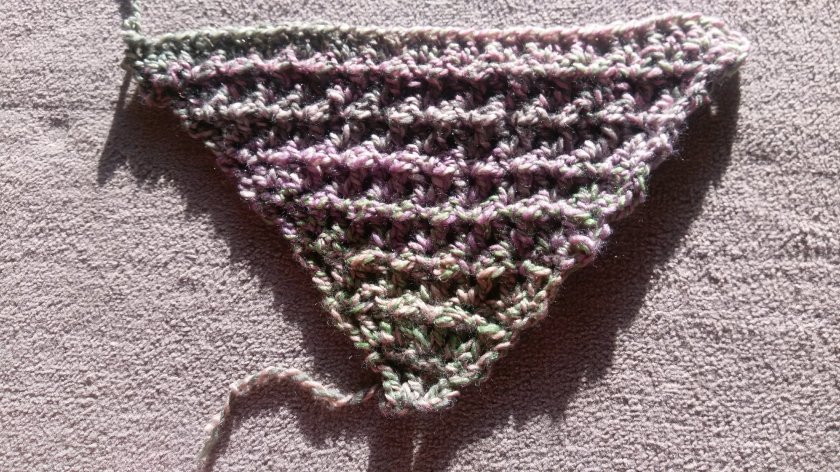 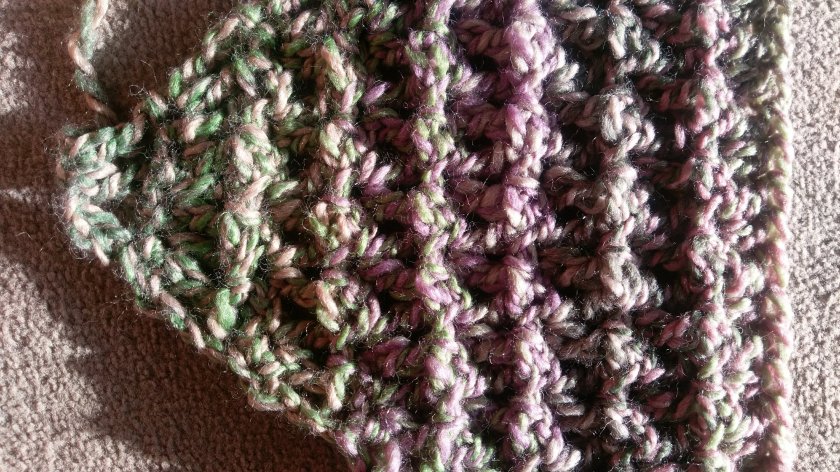 It’s cool as the wool is called cotswold chunky, and the colour name is painswick, which is the village we had our wedding reception in, and the colours are very reminiscent of the north Yorkshire moors we went through on a steam train while on holiday. And funnily enough, the stitches were a lot easier to spot now  the wool had some body to it, and i was able to follow the pattern properly, increasing the rows quicker than in my previous attempt. It’s gradually growing but I might have to take it on a train journey next week to get a load of it done in one go if Charlotte is to get a chance to wear it this autumn/winter.
OK, we’re nearly there! On our way home from Yorkshire we called in on some of mark’s friends. David has his own pottery studio and i was offered the opportunity to have a go at throwing a pot. I obviously leapt at the chance! I actually ended up trying to throw about  4 pots because the clay either ended up flying off the wheel or I ended up breaking the rim of the pot. David was very patient with me and helped me to finally get it right (or at least end up with something that looked like a pot). I don’t have a photo of the finished item, but here’s a picture just to prove I had a go! It was tricky getting the feel for it, but definitely something that improved with practice and that I’d  like to have another go at sometime. 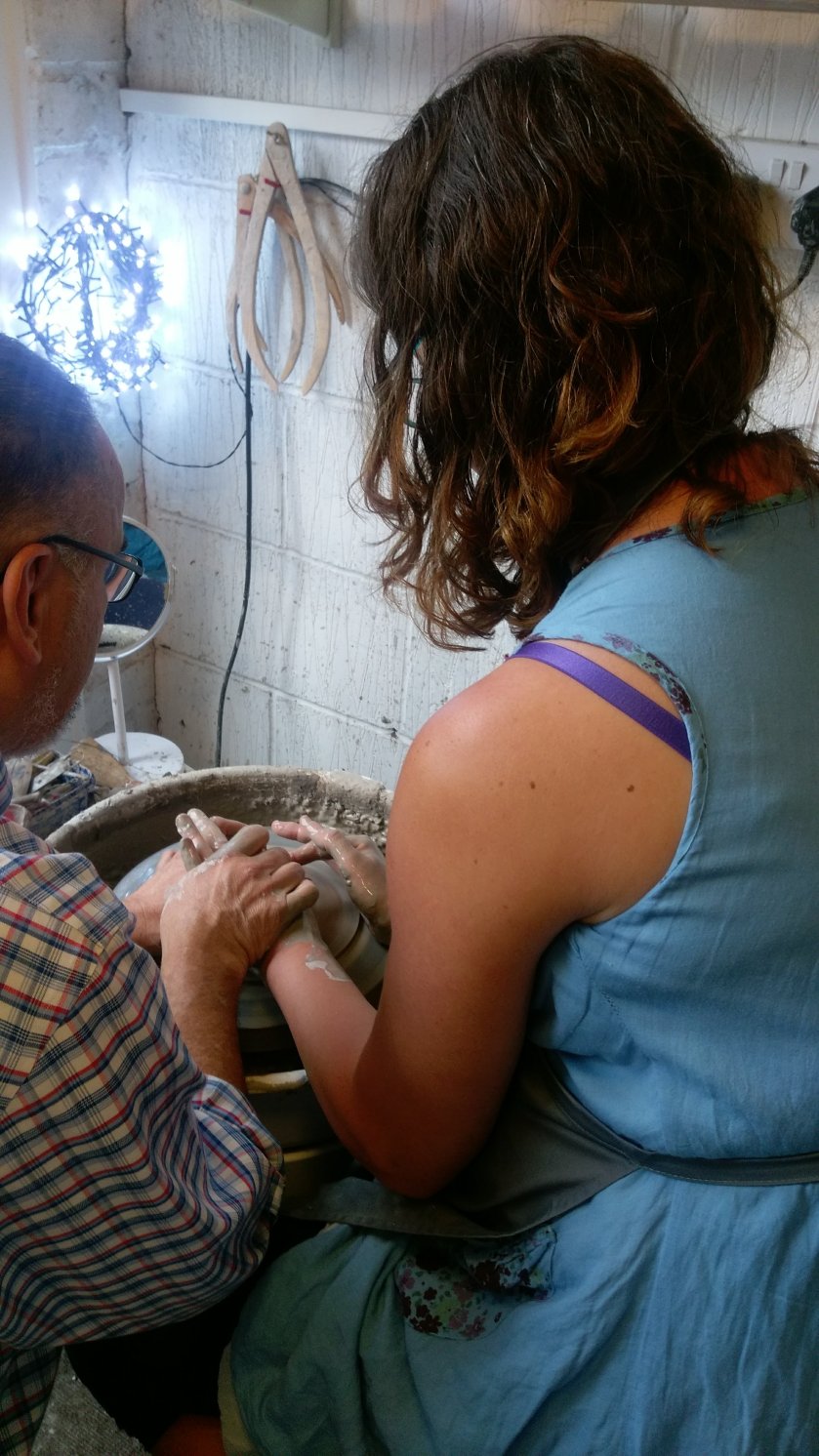 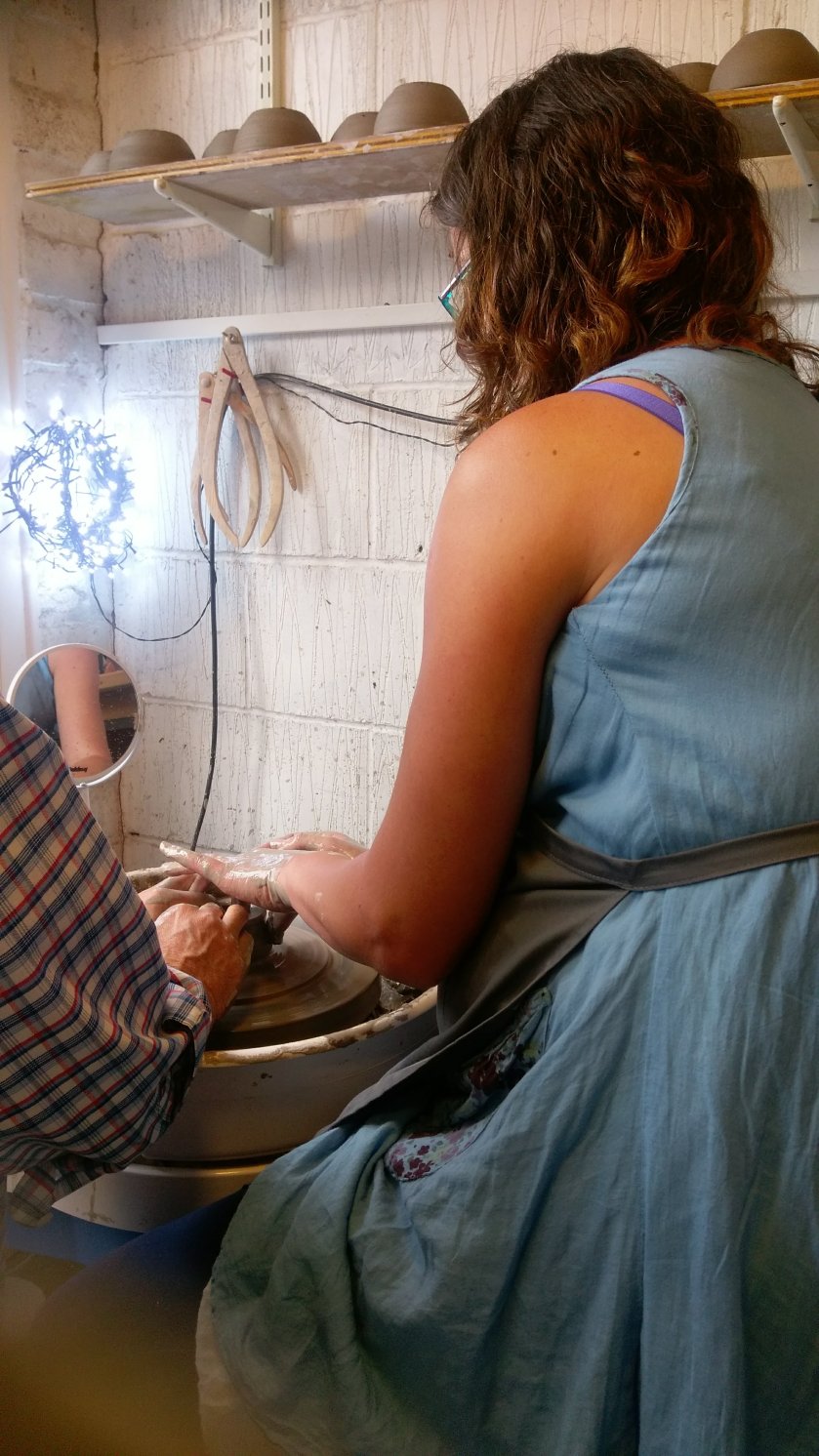 And one other bit of creativity… I went to puzzlewood with some friends of mine who were staying. I’d never been there before but it was the most amazing, magical place… Apparently a place that helped inspire JRR Tolkien’s middle earth. My friend’s 10 year old daughter and I had a fab time making up a story as we walked through, pretending we were on  a quest to defeat the evil dragon in dragon ravine, with the help of a golden oak leaf as we travelled to find the ‘hidden words of wisdom’ (her awesome phrase). We ended up crossing rivers of lava and the sparkling river of peace that had wish granting fish in it, as well as passing the bottomless drop, and villages of elves. It was a real fun time working out the story together and just seeing what we came up with. Here are a couple of pictures to whet your appetite. 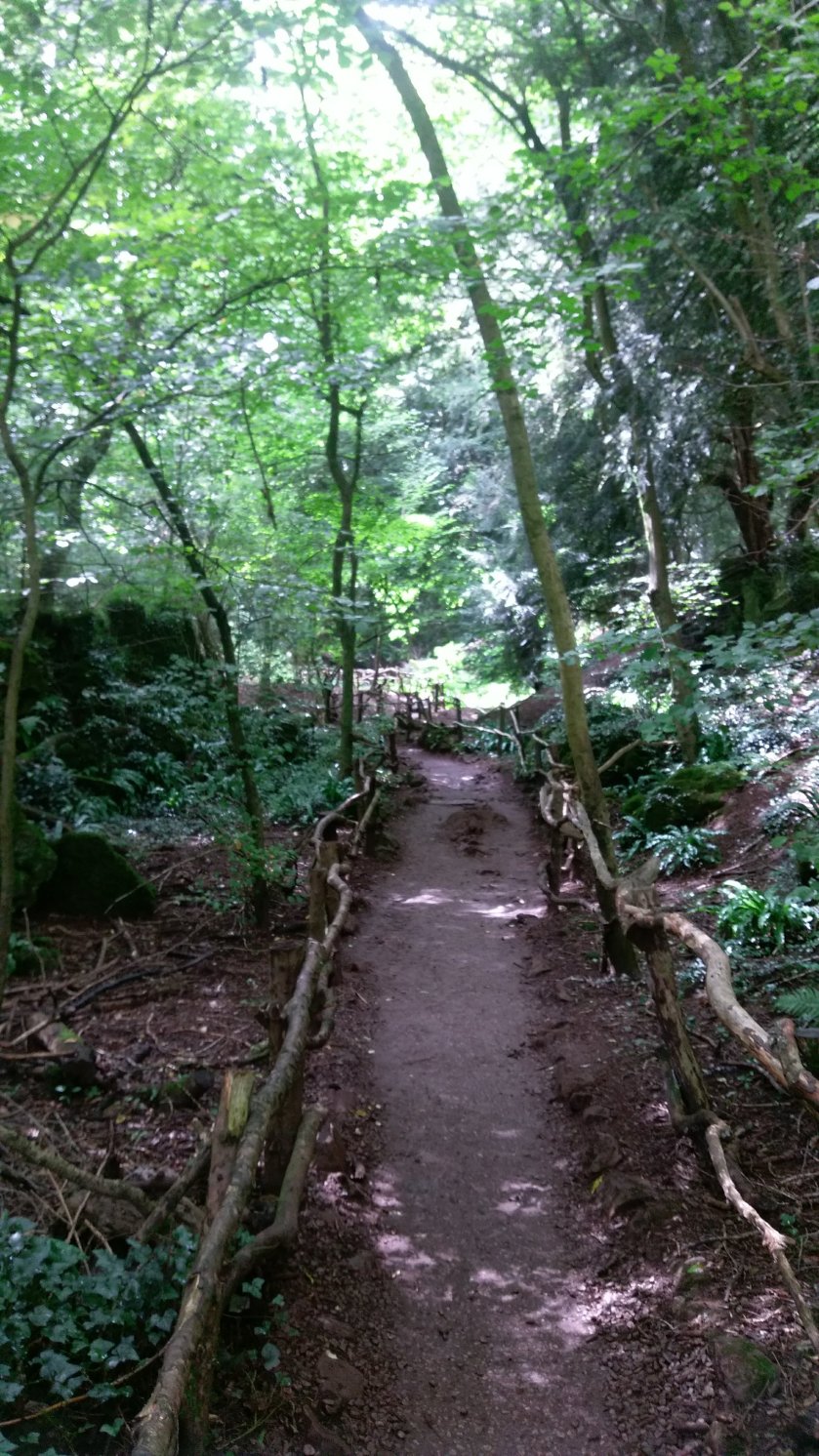 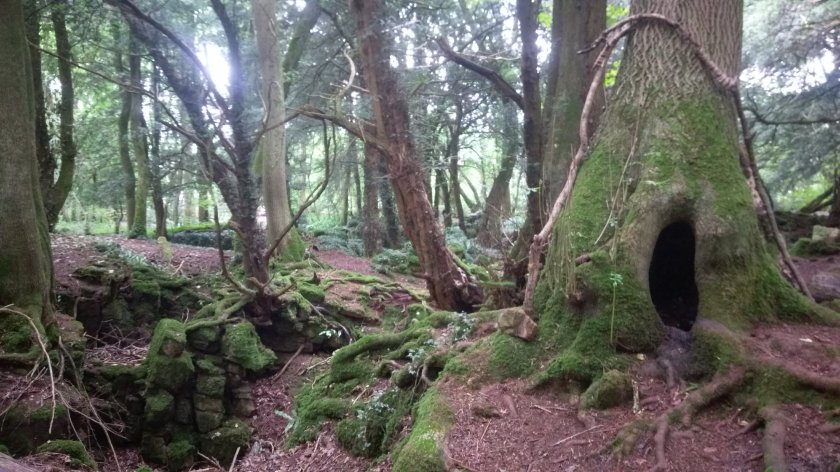 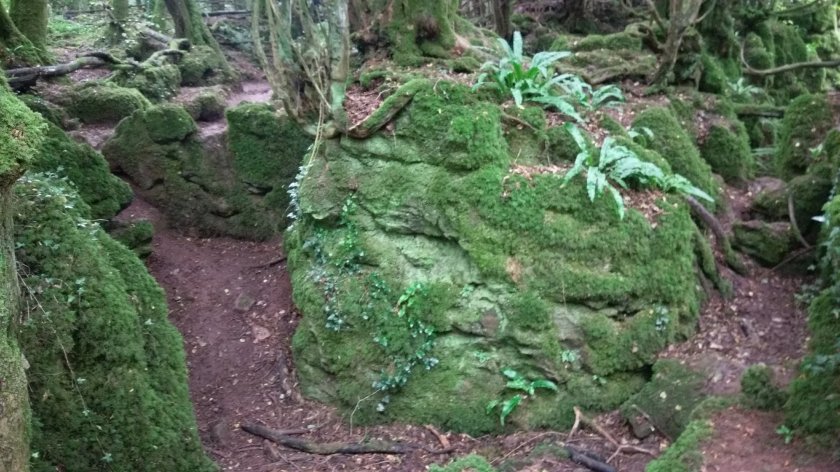 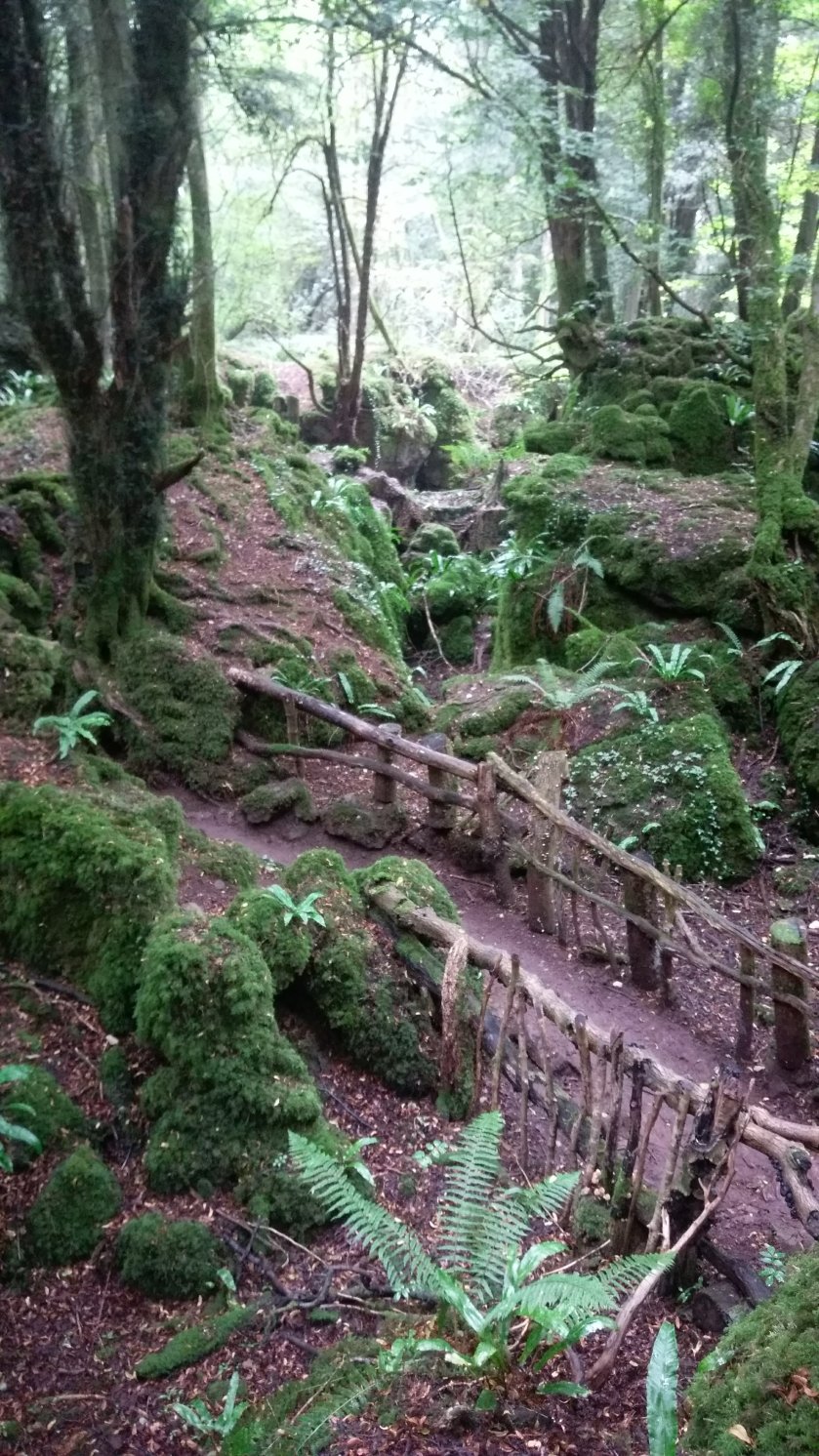 OK. That’s me up to date for now (obviously not as quick a post as I’d thought!) … You’ll have to wait till tomorrow to find out what I’ve been up to at stone carving!